As I stepped in from the cold evening drizzle and entered L’Artisan restaurant, I was overwhelmed by a delightful feeling of happy satisfaction and warmth. The sounds of clinking plates and crockery were seemingly chased about by those of animated chatter and chuckles that reverberated around the place. It was the unmistakable atmosphere that fills a room after a good meal, and this evening it was the atmosphere that filled the new home of Madrid for Refugees’ Chefugee dinner.

The Chefugee dinner is a volunteer-run event that provides the opportunity for refugee cooks to share their cultural dishes with paying diners from around the world. This evening was the fifteenth since April 2016, and the inaugural event of Chefugee guesting until May at L’Artisan. Ordinarily a French-Japanese fusion restaurant, this Wednesday night however, it was commandeered by a crack team of volunteers and five talented chefs. The culinary cast included two chefs from Syria; Yassir from Aleppo, a former hairdresser and business owner who has already collaborated three times with Chefugee alongside his wife Samira, and Wesal from Hama, a phlebotomist by profession and another regular Chefugee collaborator who has wider experience in Madrid kitchens including Amazonico and Elektra Madrid. Joining them were two Sudanese cooks; Ahmed, a hair and make-up artist whose talents even stretch to fronting a band called El Sudanesa, and Maha, a former NGO worker with a PhD in gender studies who hopes to become heavily involved with the Chefugee team. And finally, there was José from Venezuela, originally a physical education teacher with experience cooking at the Centro de Atención a Refugiado y Asilado (the refugee reception centre) in Vallecas. Unsurprisingly, they made for a truly diverse menu with flavours from three continents. Diners were able to choose from a host of mouth-watering dishes; from the more well-known plates such as hummus (Syria) and arepas (Venezuela), to less familiar tastes including Yalanji (Syria) and peanut infused mixed rice (Sudan). 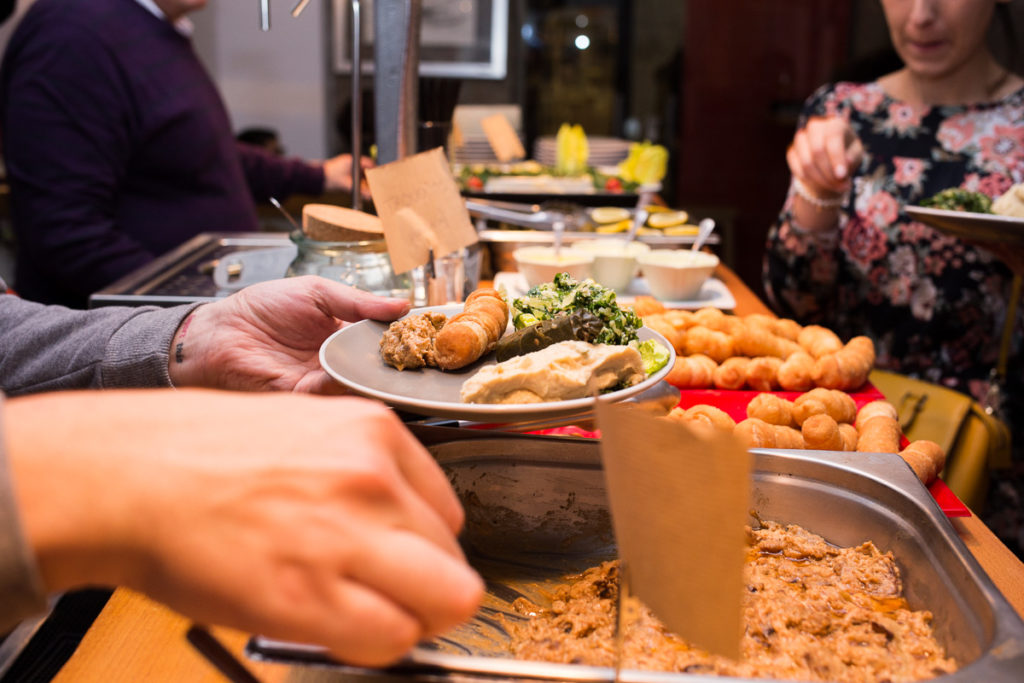 Asides from the obvious financial benefits received by MFR and the chefs themselves, this initiative provides a chance for gifted refugee cooks to fine-tune their skills and experiment with their flavours on an audience largely foreign to these dishes. For many, it can even grant vital assistance in finding further culinary employment in Madrid. Such an opportunity was undoubtedly valued by this evening’s chefs such as Wesal who dreams of opening her own Syrian restaurant, or Yassir who hopes to set up a catering business with his wife. Personally though, what is most striking about Chefugee is its obvious commitment to the “Food-Community” movement; the idea that food should do both good for your taste buds, and for your wider community. Ahmed, one of the Sudanese chefs, illustrated this telling me how he relished being able to demonstrate that as a refugee he was still able to do something, and something that made him and others equally “feel good”. The occasion itself brings together refugees, NGO representatives, and the general public for an evening of good-spirited and delicious interactions; the chefs are able to share their tasty talents and sentimental flavours, while the guests plunge into an enlightening gastronomical experience. 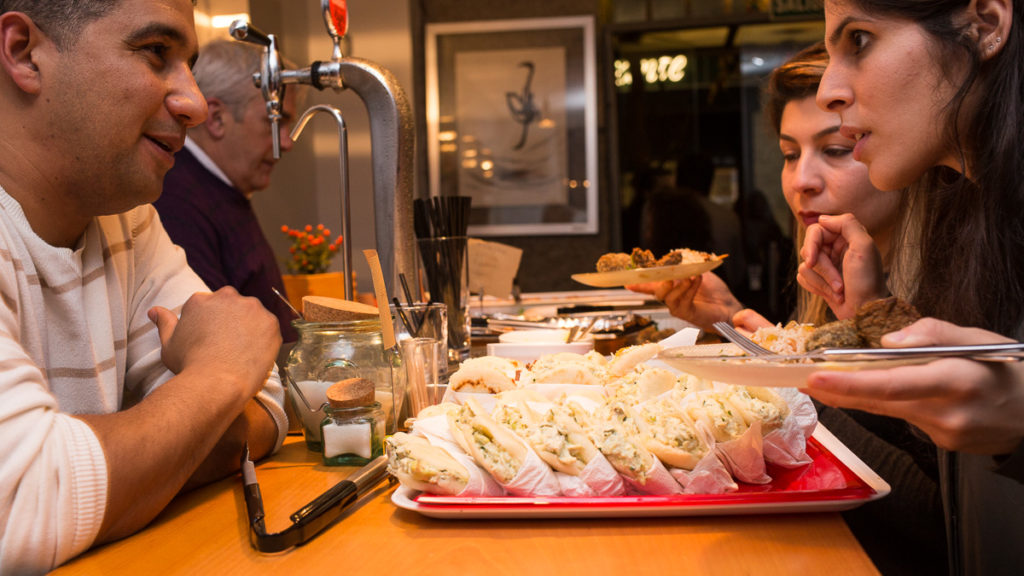 The evening, in all, was an undeniable success. The cosy restaurant was practically overflowing with guests happily squeezed onto tables literally in the doorway. Those present were a wonderful array of faces both old and new, as well as representatives from CAR, and even the wonderful Edelmira Campos from UNHCR. I was hard-pressed to find a critic harsh enough to single out a favourite dish, and those who did rarely agreed, with a range of plates, from tequeños to kofta, being praised.

Applause must equally be given to the invaluable work of the team of versatile volunteers who discarded their day-job uniforms and donned the aprons of the kitchen and bar. Without their tireless, and notably professional, efforts such an event simply would not occur, and honestly, the whole affair would lose a great deal of its charm. 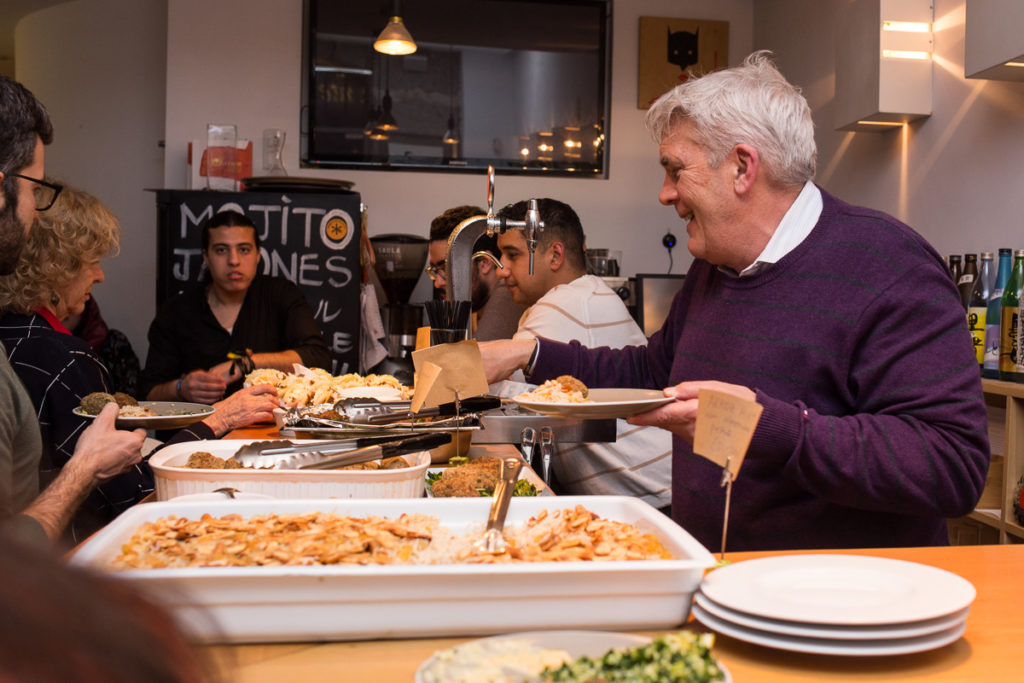 Before long, beaming smile after smile had been waved out the door while talk had already turned to the next event in the newly adopted home. Returning to the drizzle outside, I was left with a lingering scent of truly good food and an itching anticipation for the next Chefugee dinner.