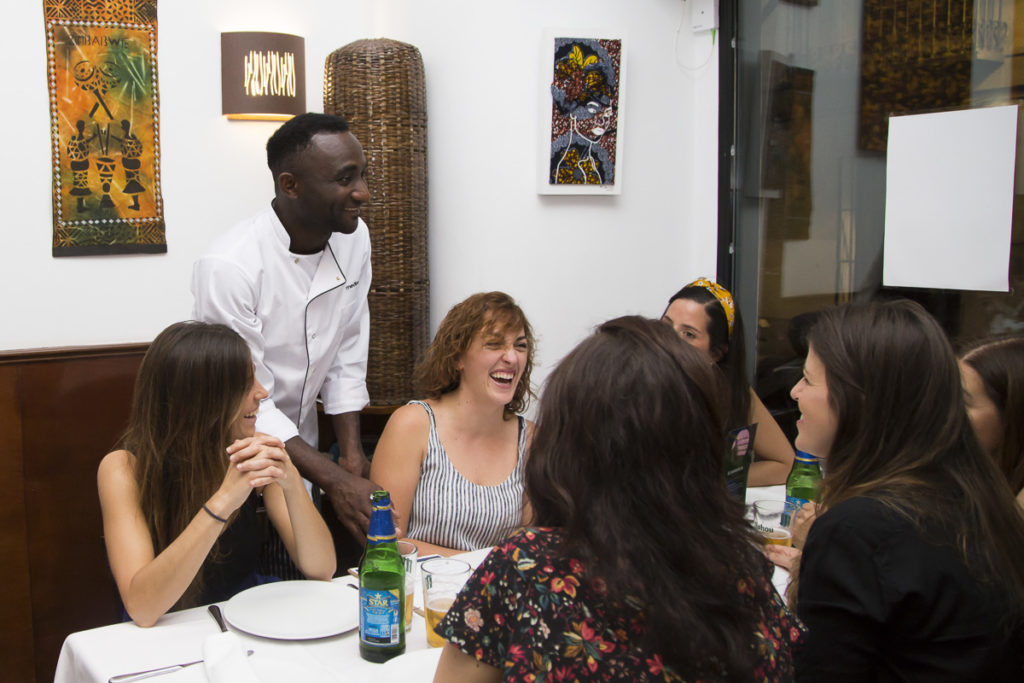 At 10 pm last night, chef Pierre T. was still warmly greeting his guests, shaking their hands, and answering questions about various features of the dishes he had crafted for them. It had been a long day starting with an early morning ACNUR conference where he delivered a speech (and met Jesús Vazquez!), multiple interviews with the press, hours of prepping for the night’s sold-out dinner event, and finally putting the last touches on his dishes before sending them off to tables full of curious and expectant diners. Still, Pierre’s demeanor was patient and kind, his smile easy and genuine, his passion for his work coming through not only in the food he prepared but also in his commitment to create a memorable experience for his guests.

This was the opening night of Madrid’s week-long Refugee Food Festival and, thanks to Pierre and the work of many MFR volunteers behind the scenes, it was a tremendous success.

The event kicked off at El Mandela, a non-profit restaurant with a mission that aligns perfectly with the work of MFR. El Mandela offers a culinary arts and hospitality program, which lasts between six months and three years, for African immigrants living in Madrid. The goal of this social project is to provide these men and women with the skills and experience necessary to find full-time, well-paid work, as opposed to working multiple unstable, part-time jobs. Any profit from the restaurant is reinvested in the workers, who gain access a wide array of new tools and training opportunities.

After so much anticipation, Pierre’s cooking did not disappoint. Rather, it just about blew all expectations out of the water. Assisted by fellow Cameroonian chef Martín and the wait staff at El Mandela, Pierre served up variations of his country’s traditional cuisine with a notable Spanish twist, highlighting the technical skills he gained from studying at a culinary institute here in Madrid. The menu featured meaty dumplings delicately wrapped in thin phyllo dough and covered in a creamy peanut sauce; three types of croquetas made from malanga, crocodile with mango (cleverly nick-named “croco-quetas”), and zebra with papaya; fish smothered in delectable Mbongo sauce, made from a smoked tree bark; and for dessert, a tart and refreshing cactus ice cream.

MFR’s Chefugee program, El Mandela restaurant, and the international Refugee Food Festival are all powered by a shared vision: to challenge stereotypes, to increase awareness of the refugee situation in a dignified and celebratory way, and to come together around delicious food. Chefugee’s cooking classes give us the opportunity to learn from and get our hands dirty with refugee chefs in the kitchen. The head of El Mandela explained to me why it’s so important to have trainees on the wait staff at the restaurant. This provides direct contact with customers and an opportunity for the workers to tell their own stories, as too often it’s someone else telling their stories for them. The Refugee Food Festival, currently taking place in 16 cities around the world, works tirelessly to make these connections between chefs like Pierre and the curious madrileños who came to taste his food more common.

Importantly, the events of the festival can be as meaningful and powerful for the chefs as they are for diners. As Pierre said at the press conference, “cooking is like returning home to my family, to my mother and grandmother.” The festival gives these talented chefs the opportunity to share some of their dearest recipes while honoring the people and traditions that handed them down through the years. It celebrates the beauty that is too often overshadowed by hardship in places of political or economic turmoil. It brings that beauty to light for all of us to enjoy.