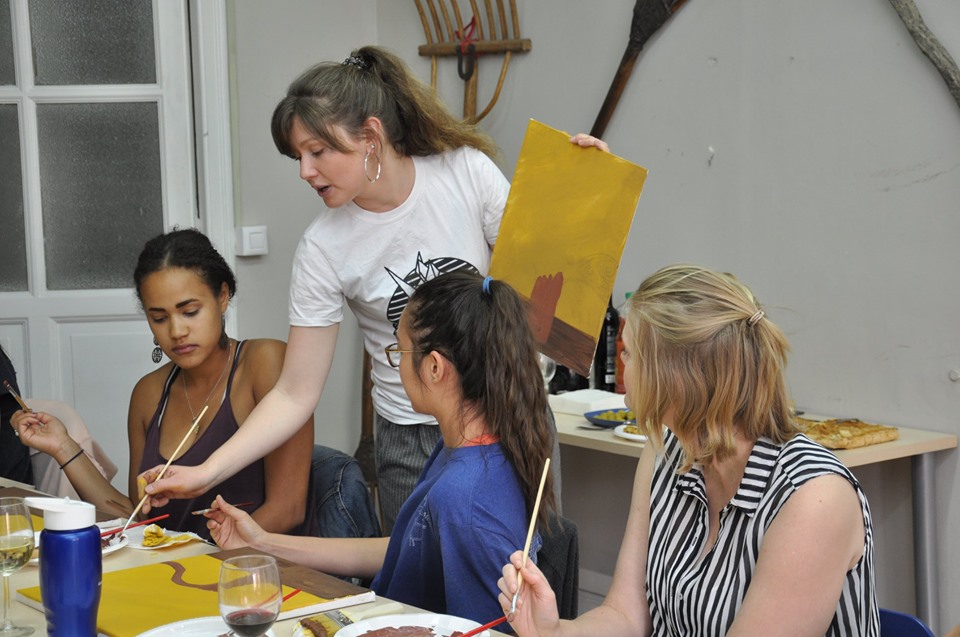 An active member of Madrid’s international community, Vesta Rounsaville utilizes art to impact the world around her. She is the hostess of the monthly Paint and Wine Workshop at Madrid for Refugees; with its next event on June 29th. Vesta guides attendees as they explore art and creativity through individual forms of expression. Vesta is a believer that art in all of its forms is a natural impulse to humans, and her goal is to make it more accessible to those most in need of a creative outlet.

Vesta originally came to Madrid from the United States to work as an Auxiliar de Conversacion, assisting schools with their transition to a bilingual curriculum. During this experience, Vesta observed the shortcomings of the Spanish educational system for students with special needs because “everyone learns differently and communication takes different forms.”

One of her students, a 12-year-old named Beatriz, whose name has been changed to maintain anonymity, who was visibly struggling with a psychological disorder called the God complex. Vesta described Beatriz as an “unstoppable force” and “full of potential and creativity.” Beatriz would refer to herself in the third person as “the Great Beatriz.” She had trouble interacting with other students her age, preferring the company of the smaller children during recess. Beatriz had many triggers, and those around her would have to be conscious of how they interacted with her. Any criticism could invoke a negative reaction. Any discussion of war or injustice would trigger Beatriz’s God Complex and prompt her to vocalize her delusions of grandeur.

The school was unprepared for a student with Beatriz’s unique needs, and the teachers were insensitive to her disorder. The staff of the school regarded Beatriz as a misbehaving child and were unable to see past her actions to her deeper issues. Vesta took an interest in assisting Beatriz both inside and outside of the classroom, making contact with Beatriz’s mother, who was appreciative of Vesta’s efforts. In their one-to-one tutoring sessions in Beatriz’s home, Vesta began to utilize art therapy strategies to help Beatriz express herself.

Vesta continues to tutor Beatriz to this day and has witnessed a lot of growth over the past 6 years. Beatriz is 18 now and will go on to study animation at university next year. As she matured and progressed in sessions with Vesta, Beatriz became aware of how her behaviors impacted her relationships with others. Rather than referring to herself as “the Great Beatriz,” she softens her delivery by saying “sometimes, I think of myself as the Great Beatriz.” As a result, she is perceived by others as confident, rather than delusional. Beatriz can now form meaningful friendships with peers in her age group and is overall well-adjusted. Vesta’s experience with Beatriz was described as one of mutual growth that allowed Vesta to begin her self-taught journey in art therapy. 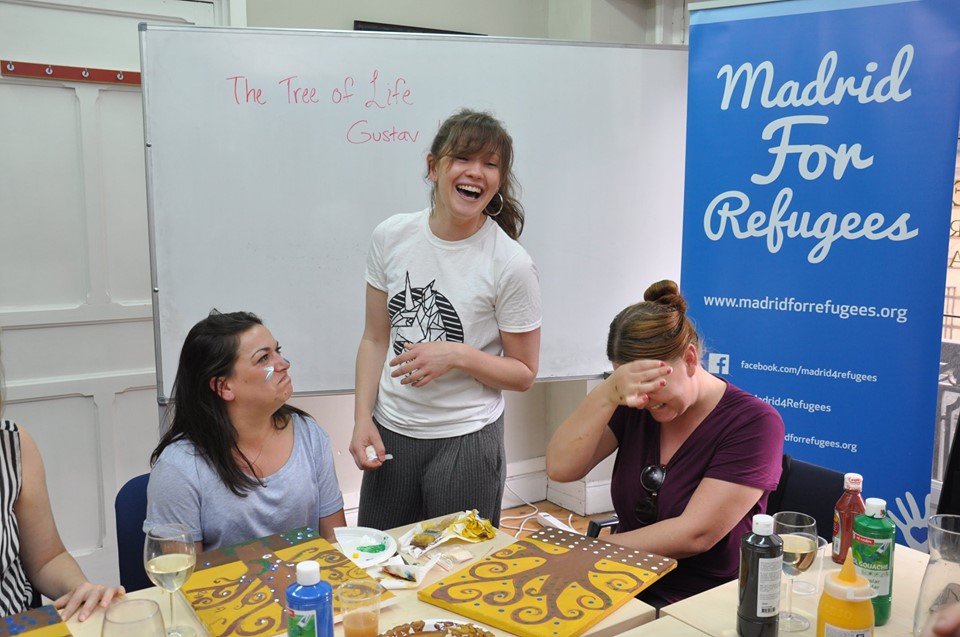 Vesta’s passion for art inspired her to design a program called “A Space to Express” that can effectively implement art therapy into a school curriculum. Her ambitions for the use of her program extend beyond the Spanish school system. Vesta depleted her savings to fly to Athens to spend her summer volunteering as an art therapist assisting refugees through an NGO called Hestia which is coincidentally her own name in the Greek language. Hestia is an organization that specializes in helping refugees receive psychological care as well as hands-on courses where they can learn practical skills such as coding.

Not long after her arrival in Athens, Vesta observed the shortcomings of Hestia’s ability to provide aid. Despite having the best of intentions, red tape and bureaucratic roadblocks hindered the efforts of the volunteers. For instance, because Vesta is a self-taught art therapist and lacks certification, she was unable to implement her art therapy program without the presence of a psychologist. And due to the overworked psychologist’s lack of availability, she only had the opportunity to utilize art therapy twice. Her role was reduced to that of a caretaker to a small group of refugee children while their parents were in training sessions. Vesta and these children were able to make artwork together but Vesta felt it was not enough.

During a night out in Athens, Vesta was befriended by a psychologist from Barcelona who was also there with the intention of providing aid to migrants and refugees. They formed a bond quickly over a discussion about the shortcomings of conventional NGOs, whose regulations hindered access to people in need.

Vesta’s new friend introduced her to an informal and clandestine organization, which cannot be identified for security reasons. Founded by a group of psychologists that specialize in migrant aid, the organization promised Vesta free reign to implement her art therapy program.

Vesta was instructed to wait at a predesignated rendezvous point on a street corner in the anarchist zone of Athens which lacked police protection. Vesta was approached by a contact who led her through the back alleys of the district to a seemingly abandoned building structure whose entrance was obstructed by a wall of wood and rubbish. Upon entering, Vesta saw women washing plates and clothes in a fountain and children running around and playing.

Vesta learned that while the Greek government was doing everything in its power to help migrants and refugees by providing them with government housing, they could not protect women and children from sexual violence in these overcrowded locations. This prompted a group of women and children to flee the unsafe shelters to abandoned building structures where they could live without fear. With the assistance of the covert organization, these women created a safer space to raise their children. 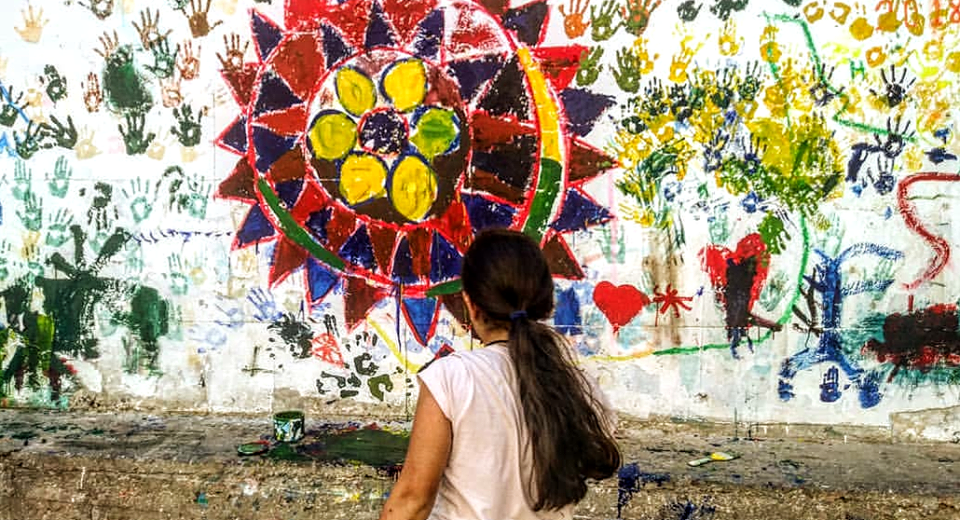 Vesta continued to volunteer with Hestia in an official capacity during her mornings and afternoons. When they closed, she would visit the refuge and implement her art therapy program exactly as she had envisioned it. Her fellow volunteers with the underground organization referred to her as an art therapist despite her lack of formal certification. The vast space of the building structure allowed its many rooms to be devoted to activities such as yoga, art therapy, cooking, and creativity was allowed which would not have been achievable at a conventional NGO.

After the summer ended and Vesta returned home to Madrid, she put her artistic talents to use by raising funds for Madrid for Refugees through hosting the monthly Paint and Wine Workshop. These gatherings have become incredibly popular among locals and visitors to the city who pay €25 to receive Vesta’s art therapy guidance. All of the proceeds of these events are allocated towards Madrid’s refugee community. Vesta’s ultimate goal is to utilize the Madrid for Refugees space to implement her art therapy program to support migrants and refugees in need of a creative outlet.

%d bloggers like this:
We use cookies to ensure that we give you the best experience on our website. If you continue to use this site we will assume that you are happy with it.Ok