A pleasant feeling of anticipation lingered in a busy makeshift kitchen where strange contraptions lay on large tables crowded with pre-prepared food and spices of multifarious shapes and colours. This was the setting of the second cooking class organised by Madrid for Refugees (MFR), in which a refugee chef shares their kitchen skills with paying attendees. Guests are taught how to craft a selection of salivating cultural dishes through an interactive experience, and this time around they were even lucky enough to take home some generously packed tupper boxes. What makes these classes unique however, as with many MFR events, is the external impact they have. Precious funds are raised for the chefs involved, every piece of which is essential in assisting them and their families as they start their new lives in Madrid or support loved ones back home.

The afternoon’s gastronomic genius was the wonderful Wesal, from Syria. Wesal has already dazzled with her abilities at several Chefugee events over the past year, and it was now time for her to finally reveal some of her kitchen secrets. A former lab technician before the war in Syria, she now works hard with her husband to provide for her family of four living here in Madrid. The class itself had the important purpose of raising money for her brother, who still lives in Syria. He is suffering from serious heart problems and had to have cardiac catheterisation surgery. It was an incredibly expensive surgery and meant that Wesal had to repay debts totalling €2000. This class was a small but essential step on her path to reaching this target, the money raised from this, and other efforts, has now been taken to Syria. 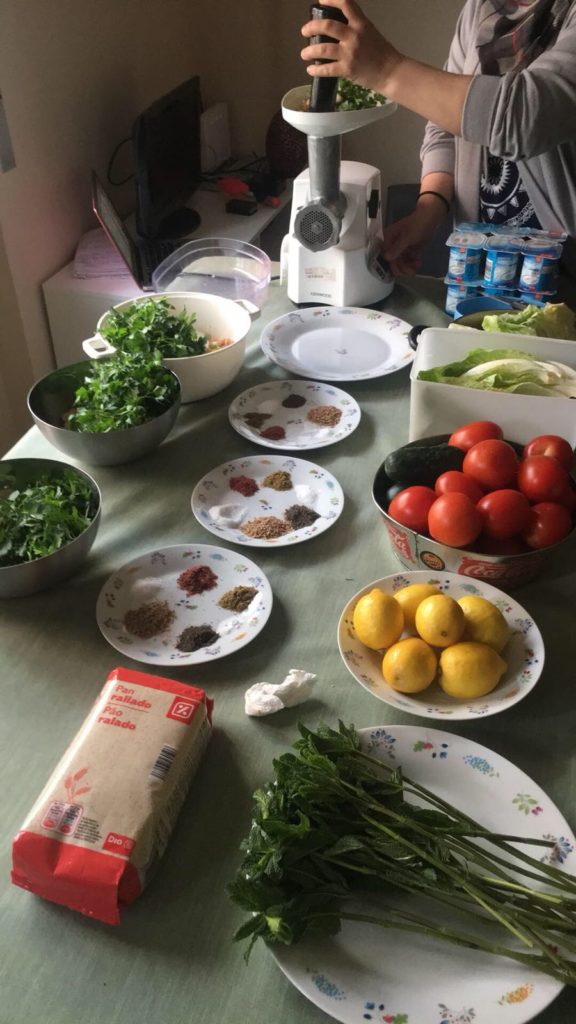 Before the work began we were all informed about a further mouth-watering way in which Wesal has been gathering funds. Her back-breaking efforts even stretched to the creation of a small Chefugee TO GO catering initiative in which she prepares tupper boxes packed with her delicious edible inventions to serve as easy but delectable lunches for busy people in Madrid. At the very reasonable price of €16 you receive three tupper boxes filled with wonderful homemade goodness. All proceeds went directly to Wesal to aid her family both in Madrid and Syria, especially with those costly medical fees. While the official programme finished at the end of April, if you’re still interested in sampling the lunches and helping Wesal, you can send an email to Chefugee; chefugee@madridforrefugees.org .

Besides a talented and driven chef at the helm, the class was also fortunate to have a beautifully diverse and engaged group of students appear, with faces hailing from the US, the UK, Spain, and Italy. All were more than ready to get their hands dirty and eagerly entered into the culinary unknown courteously following their expert and ever-patient guide, Wesal. Almost instantaneously, an idyllically amicable and relaxed atmosphere developed that catered for a fluid learning experience, as one person noted she felt as if she was “learning among friends, if not family.” 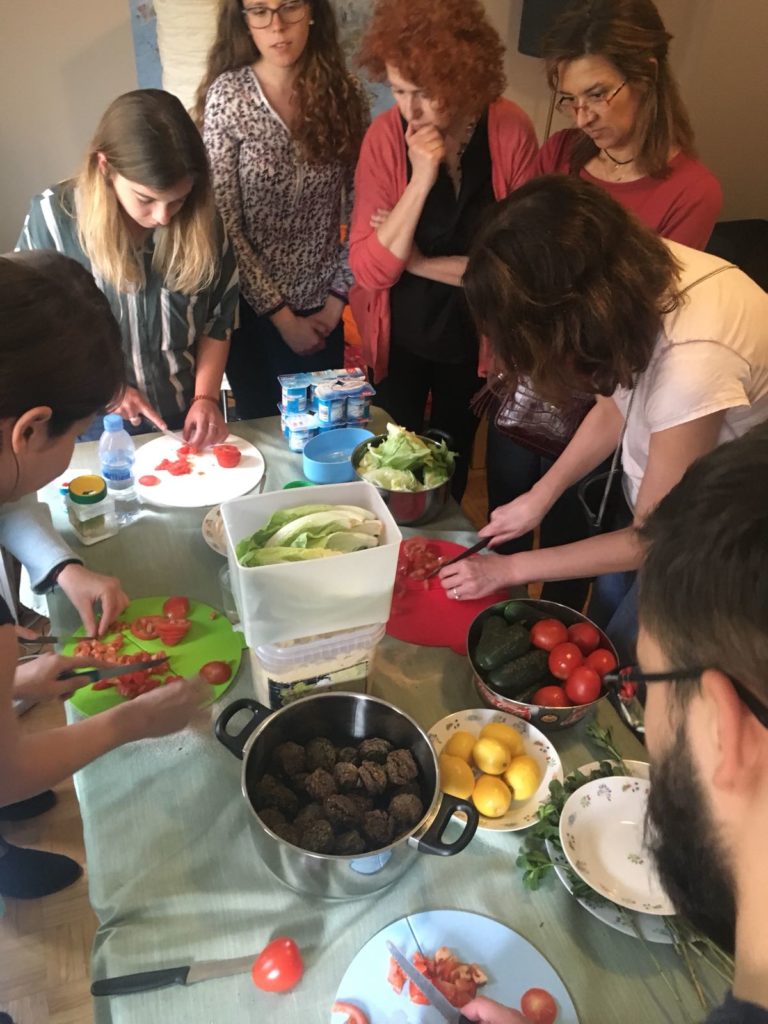 On the menu was a selection of well-known tantalising plates. The headliners were Syrian style hummus and falafel, which were accompanied by some lightly spiced rice and a refreshing yoghurt salad. Together these culminated in what Wesal simply termed a “Syrian Falafel and Hummus Sandwich”; I can assure you though there was nothing simple about the flavour.  Those present were even gifted the recipes for everything they created, ready to replicate the delicious flavours for friends and family, and spread the happy fever of good tasty food. 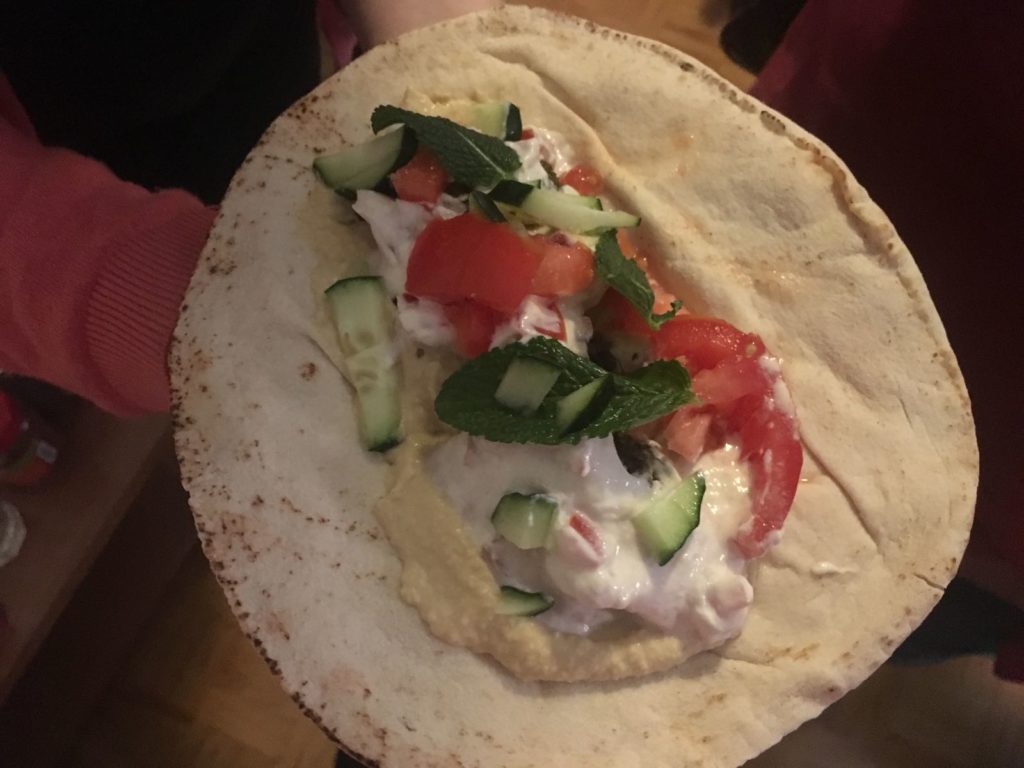 Over €250 was raised in aid of Wesal’s cause, every cent of which will be vital in ensuring her brother’s speedy recovery in Syria. What’s more the class brought such pleasure to all involved. Wesal expressed how she cherished the opportunity to raise money by sharing a passion of hers with curious souls. Meanwhile, the guests delighted in a “fusion of interests”, as one attendee put it, being able to develop their cooking knowledge while supporting an important cause.

As the sandwiches settled and the tupper boxes were stuffed, all that was left was for a grinning Wesal to assure us this would the first of many classes. If you’re interested in getting involved in future classes or any future events then be sure to keep a beady eye on the Chefugee Facebook page, you can do so by following this link;