Walking through the doors at Barrutia y El 9 feels special. It’s the kind of picturesque, old-school Spanish bar that’s becoming more and more difficult to find in Madrid. The walls are covered with ornate tiles and the bar itself, while small, features all of the basic necessities: cold beer and herbed olives waiting to be plated for the guests that began pouring in shortly after I arrived. Luis, the stoic yet amiable chef and owner, greeted them each and cordially escorted them to their seats. The restaurant was quickly filled with lively chatter and a notable hint of anticipation brought on by the aromas spilling into the dining area from the kitchen nearby.

Barrutia y El 9 is known for its typical Basque-style cookery, but tonight the chefs and wait staff were prepared to serve up an entirely new take on the region’s world-famous cuisine. Luis had teamed up with Wesal, a Syrian refugee and frequent participant in Chefugee’s pop-up dinners and cooking classes, to create a seven-course menu combining the flavors and techniques of their respective culinary heritage.

When asked why he wanted to be a participant in this year’s Refugee Food Festival, Luis’s response was simple but impactful. He believes in the ethics behind this initiative as well as the value of sharing refugee cultures through food. He was also asked about the experience of integrating Wesal into his kitchen during the days leading up to the event. He explained that his staff is made up almost entirely of female immigrants from the Dominican Republic, that they welcomed her into this new space and the team worked together seamlessly.

I first met Wesal in a cooking class with Chefugee back in April, where she taught us her recipes for falafel and hummus. During the class, we created a typical Syrian-style falafel and hummus sandwich with pita bread and a tahini-yogurt sauce. Today, though, her signature dishes were reimagined in totally new ways. The hummus, for example, was whipped and poured over a small bowl of Basque-style shrimp and ripe cherry tomatoes. This combination, which surprised me when I first read it on the menu, made for one of the most memorable flavors of the festival. The hummus was light and creamy and perfectly complemented the bites of meaty shrimp… it was one of those things you have to taste to believe.

The hummus was just one of many dishes that reinterpreted features from both cuisines to create something new and exciting. Another crowd favorite was Luis’s bacalao (salted cod), which was paired with Wesal’s tabulé (tabbouleh). As Luis explained, bacalao is one of the most important ingredients in Basque cooking, dating back hundreds of years and often appearing in dishes like stews and pintxos. Likewise, tabulé, which originated in Syria and Lebanon, is an integral component of many Middle Eastern diets and has become hugely popular throughout the world in recent years. Marrying the two was nothing short of spectacular.

One of the final dishes, perhaps the most popular among the guests, was Luis’s Dominican-style chicken (influenced, of course, by his hard-working kitchen staff), which was served with Wesal’s rice and roasted eggplant. This dish was the product of fusing culinary elements from three different corners of the world, prepared and served by a diverse group of people working together in the same kitchen with the same goal. It seemed like an elegant representation of what the Refugee Food Festival hopes to accomplish. The festival is an opportunity for chefs to collaborate, to reach across differences in order to create something original and inspiring. Luis and Wesal seized that opportunity and their vision played out beautifully in their shared kitchen. 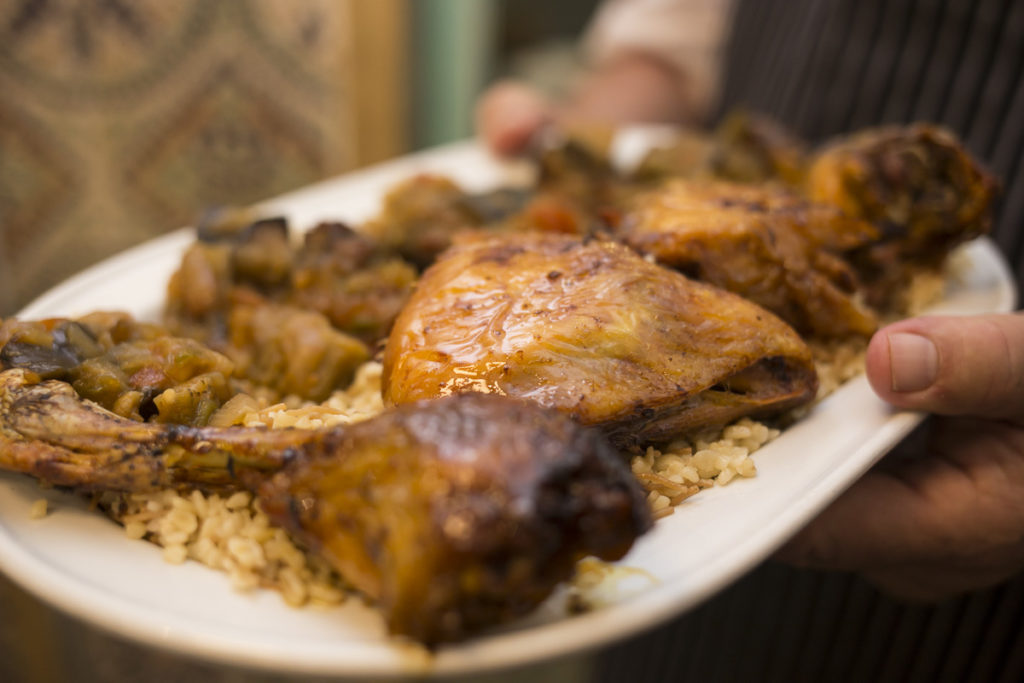